The State Authorization Reciprocity Agreement (SARA) is an agreement among member states, districts, and territories in the United States, which establishes comparable national standards for interstate offering of postsecondary distance education courses and programs. It is intended to simplify the process of taking online and distance courses offered by postsecondary institutions based in another state. It also simplifies the process of participating in , internships, or practicums outside of the state of South Dakota. SARA is overseen by a national council (NC-SARA) and administered by four regional education compacts.

Western Dakota Tech has been approved by the State of South Dakota to participate in NC-SARA and was accepted as a SARA institution on February 27, 2017. South Dakota joined W-SARA (Western Interstate Commission for Higher Education (WICHE), which is one of the four regional education compacts who administer SARA) on November 11, 2014. At this time, 49 of the 50 United States are SARA members. 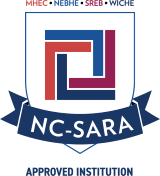 To file a complaint: